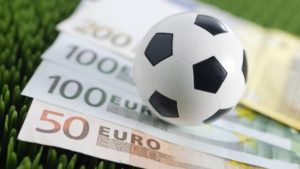 Europe’s summer transfer window officially terminated on September 1st with unprecedented spending witnessed across the continent. The English Premier League led the way with nearly 1.2 billion spent this summer alone.1 Italy’s Serie A was a surprising, albeit distant second, at 550 million spent. Spain’s La Liga was not far behind at 545 million spent.

Clubs around Europe have re-opened their checkbooks with news that UEFA’s decision to relax its Financial Fair Play (FFP) rules.2 FFP came into effect in the 2012/2013 season with the idea that football clubs should not spend beyond their means. At the time the developed world was struggling to emerge out of a global financial crisis, which left its mark on the professional game. Many clubs had continually spent more than they had earned and were reporting substantial losses year after year. Some clubs such as Glasgow Rangers or Portsmouth had been unable to pay their debts and eventually went into bankruptcy. The FFP established a set of regulations, which prohibited clubs from spending more than they make. If these regulations were violated, clubs would be banned from European competition and fined.

FFP proved to be an added obstacle for clubs such as Chelsea, Manchester City and Paris St-Germain who had billionaire owners willing to invest in the club but unable to do so under the new regime. Clubs now had to come up with creative ways to generate revenue in order to increase their spending on their playing staff. Both Manchester City and PSG were each fined approximately £30 million in 2014 for breaching FFP.

FFP was sharply criticized by clubs for maintaining the status quo. In 2003, Roman Abramovich took control of Chelsea FC, an upper tier Premier League Club and spent hundreds of millions of dollars to transform them into perennial title contenders. The rest is history. Chelsea have never looked back and are now regarded as one of the most prestigious clubs in the world. Many have criticized UEFA’s regulations for prohibiting future ambitious owners from doing the same.

Currently, Belgian lawyer Jean-Louis Dupont is at the forefront of a legal action against UEFA, arguing that FFP is in violation of the European Union’s rules on free markets. Furthermore, with the announcement of a record TV deal for the English Premier League clubs coming into effect next season, there was a fear in Europe’s other leagues that they were on an uneven financial playing field with English clubs. Europe’s elite have not waited for the courts to make a decision. Abu-Dhabi backed Manchester City have spent nearly £220 million this summer alone. Qatar-backed PSG have spent over £120 million. Not to be outdone, Manchester United spent £49 plus add-ons for Anthony Martial, an uncapped teenager who scored 8 goals for Monaco in the Ligue 1 last season. Barcelona FC, under transfer ban, still managed to sign two players for £50 million.3

Under Michel Platini’s stewardship, UEFA have attempted to create a more level playing field for clubs to compete in. For instance, UEFA has increased the number of teams who qualify directly for the Champions League by winning their own domestic league. As a result, fashionable Real Madrid played two games against first timers Ludogorets of Bulgaria last season. This year, Atletico Madrid will take the scenic trip to Kazakhstan to face another debutant in Astaras. Clearly more clubs have been able to participate in Europe’s elite competition, creating more parity amongst the leagues.

However, with the loosening of the FFP rules, Europe’s richest clubs will be able to invest in their playing staff with little concern of going in debt and being punished. This places smaller clubs in danger of being forced to sell their best players to superclubs with deep pockets. With so few teams able to afford the highest transfer fees and wages, this is likely to cement the status quo.